The Italian pianist Roberto Prosseda invited me to take part in a symposium in Cremona during the annual festival in which luthiers and piano manufacturers from all over the world congregate for their annual exhibition. I had never been to Cremona before. The hotel was a stone’s throw 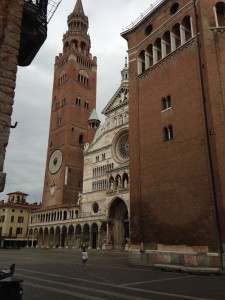 away from the imposing duomo – the medieval centre of the town is still intact – and it was a wonderful privilege to wander the streets to the home of Antonio Stradivarius. 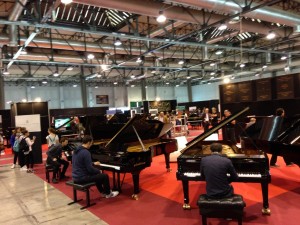 Roberto gave me (and the other four writers and critics) a free hand over our subject matter. So this is what I chose to talk about – with the help of a wonderful simultaneous translator:

Do you ever have a feeling of déjà vu when you peruse concert listings to see which piano concertos are being played? Does the fare seem ever so slightly familiar, the same from one year to the next? Are any of the works surprising or intriguing? No, I thought not.

While I was waiting to introduce the first of Warren Mailley-Smith’s Chopin’s recitals (see my earlier blog) I had a look at the forthcoming concerts at St John’s Smith Square. . And you know what? I could almost have told you the names of the composers whose music was to be played without looking at the leaflet.

And so the series continues with more Beethoven, more Brahms, more Prokofiev. All great composers – no one is denying that – but all, as far as programming is concerned, inevitable and predictable. There is a hierarchy of classical composers, whose names crop up on programmes all over the world like McDonalds or Costa or Pret-à-Manger… brand names you can rely on, ubiquitous, safe bets. Places – and composers – familiar to us so we know what we’re going to get, more or less.

Turn that on its head and let me take you to Husum, a tiny town in northern Germany where, for the past 29 years, they have held an annual festival of piano rarities. I’ve had some involvement with it since its inception. The whole artistic credo is this: no Bach, no Beethoven, no Brahms, no Schubert or Prokofiev or anybody else UNLESS it is a work by them which has rarely been performed. (Last year, for instance, Joseph Moog played Beethoven’s Fantaisie in C major.) And pianists are not invited unless they can offer a complete programme of works that are rarely heard or by composers whose works have been neglected.

Don’t let anyone tell you Husum is a concert / festival for specialists. Yes, piano buffs (what I call pianoraks) come from all over the world, but among the audience is a high proportion of local people and music-lovers from all over Germany. Every concert is sold out months in advance – all 160 seats plus the overflow section next to the concert hall. There is not just a niche market for this repertoire there is a need – a thirst – for something new, something different.

At home on my computer I have a file provided by a piano-loving friend of over 40,000 pieces of piano music that are non-standard repertoire – by which I mean piano music that is rarely or never heard in the concert halls of the world. I meet pianists who say ‘Oh I’d love to play something by Tausig or Thalberg or whoever but if I suggest it, the concert promoters ask for something else.’

And one particular period of musical history is consistently and rigorously ignored, paradoxically a period when probably more piano concertos were written than at any other time: the nineteenth century. What have programme planners got against the virtuoso romantic piano concerto?

Here is what will be on offer this year and (I can guarantee without any reference to a crystal ball) in 2016, 2017 and so on ad infinitum.: Chopin 1 and 2, the Schumann, the Grieg, Liszt 1 and 2, Tchaikovsky 1, Brahms 1 and 2, Saint-Saëns 2 (perhaps), Rachmaninov 2 and 3 (though not strictly 19th century), topped up with Mozart, Beethoven 1 – 5, Prokofiev 3 and Ravel (G major) for good measure. All of them are undoubted masterpieces. I love them, but…

Nearly twenty years ago I wrote to the late much-missed John Drummond, then in charge of the BBC Proms. I knew John a little and asked if he wouldn’t consider one or two piano concertos with which the Proms audience might not be familiar but which, with the right soloist, would raise the roof of the Royal Albert Hall. Was it not time, indeed were the Proms not the ideal opportunity, to re-introduce the once-popular now-neglected virtuoso barnstormers of the nineteenth century? The Proms, renowned for mixing the familiar with the forgotten and the completely new, would surely be the right platform for works like the Henselt F minor and the Scharwenka B flat minor to have the dust brushed off them? Wouldn’t it be great to give the Grieg a rest for a year or so?

John thanked me for my ‘interesting letter’. I was not surprised to learn that he knew both the Henselt and the Scharwenka concertos. ‘I think they are extremely jolly,’ he wrote, ‘but I don’t think they are better than the Grieg which is in my opinion rarely played in concert series like the Proms – three performances in the past twelve years [this was 1993]. But I think they might work, and I will go back and look at them again. However, they are not really alternatives to the Tchaikovsky or Rachmaninov; they are alternatives to a different league like the Saint-Saëns concertos. You probably won’t agree [he was right], but that’s what I feel.’

Well, Sir John relinquished his position as Proms supremo in 1995 (sadly, he died in 2006) and that was the last of it, my brief optimism extinguished. Since then – and I don’t mean this as a let’s-knock-The-Proms rant – I have searched in vain for a Henselt or Scharwenka to appear. With the exception of Stanford’s C minor concerto in 2008 with Finghin Collins (he’s just recorded it for Claves) there have been none. OK it was written in 1911 but you take the point. Meanwhile since the Proms started in 1896, the Tchaikovsky PC No.1 has been played 101 times (the 2nd concerto only 29, the 3rd concerto in 5 seasons, the Concerto Fantasy in 4); the Grieg has notched up 92 performances, Beethoven’s Piano Concerto No.4 has been played 120 times, the ‘Emperor’  128 times, Schumann’s Piano Concerto 107 times.

Why are concert promoters, especially in the UK, so unwilling to programme concertos other than the predictable and over-played? Is it because they don’t know what’s out there or because they like to rely on the box-office certainty of the Top Ten?  Why risk a Raff, Rubinstein, MacDowell or Moszkowski when there’s the easy option of a Schumann or Chopin? Is it lack of rehearsal time? Conductors who cannot spend valuable time knocking an unfamiliar score into shape? They seem to find the time for purely orchestral works.

The record industry has led the way – at least, the more adventurous indies have led the way (the major labels show the same risk aversion and limited horizons as concert promoters) – with the likes of Chandos, Dutton, CPO and, especially, Hyperion resurrecting scores of forgotten scores, many deserving rather more than the one performance they get for the recording. It needn’t be a disaster: the unlikely coupling of Scharwenka’s Fourth and Sauer’s First won the Gramophone Recording of the Year Award in 1996. The disc has sold over 40,000 copies. To put that into context, the current 66 volumes of Hyperion’s Romantic Piano Concerto series has sold in excess of three quarters of a million copies to date – an average of about 14,000 each. If that doesn’t prove there’s an audience out there, I don’t know what does.