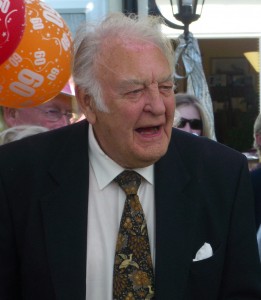 Don at my 60th birthday party

Three occasions epitomise to me the great qualities which made Don so beloved of so many people. We were doing a Christmas charity gig in Bury St Edmunds for some cause or other with Libby Purves and Ian (‘Don’t tell him your name, Pike’) Lavender. Afterwards we repaired to The Angel for a drink. We took over a corner by the fire and for the next two hours Don went through his repertoire of theatre stories and anecdotes. I have never met anyone with such a fund or anyone who was a better raconteur than him. He simply loved entertaining people like this – Jeremy Sinden was the same. In fact both father and son disliked talking about themselves, their worries, their health or anything personal. They would change the subject or find an excuse to get into the next anecdote. Donald had an encyclopaedic knowledge of the theatre and its famous practitioners, and of course he had worked with all the greats from the 1940s onwards. That was a memorable evening.

I invited him to my 60th birthday party in 2007. Diana, his wife, had died three years earlier and he was on his own, coping uncomplainingly with his new circumstances. He drove up all the way from Kent on the Sunday morning. ‘You do know,’ he said when he arrived, ‘that I turned down the unveiling of Ralph Richardson’s statue on the Southbank to be here.’ I felt very chuffed and privileged. He didn’t know a soul at the party. Having gone round everyone introducing himself and charming the assembled company (who were, it must be said, slightly in awe) he established base camp on the patio and attracted a circle of various showbiz chums I had invited who listened enthralled to the Sinden repertoire. He seemed to enjoy the company of strangers as much as his fellow thesps.

A few years later I invited him to be guest speaker at my annual Jerome K Jerome dinner in Walsall. Once again he hauled himself up from Kent and thrust himself into a crowd of complete strangers, none of whom had any association with showbiz. He simply loved talking to people, finding out about them getting cues from them for the next anecdote and making whoever he spoke to feel they were his new best friend. What a gift! He over-ran his allotted time by 20 minutes – an unstoppable string of stories and insights. Some weeks after the dinner he sent me a cheque. It was for half the amount of his speaking fee. I rang to ask him why he had done this. ‘No no,’ he blustered, ‘I don’t need all that. It was far too much. You didn’t need to pay me all that.’ What generosity. Says it all, doesn’t it?

I saw his health slowly deteriorate over the next few years. His recall for names and events started to fail him, greatly frustrating for anyone with a natural sense of comic timing and love of a good punch line. At his 90th birthday party at the Garrick – the whole place was crammed to overflowing with well-wishers in an unprecedented tribute – he had aged noticeably and couldn’t stand for long. ‘Ah Jeremy, dear,’ he said recognising a familiar face ion the throng. ‘Isn’t it lovely? You know, I haven’t got a clue who all these people are.’ During the final months, his quality of life declined rapidly. For such an affirming life force, it must have been a terrible blow. I don’t think he would have wished to linger.

What a lovely man – wise, funny, concerned, interested in everything and everybody (except the internet and social media), tremendously gifted, with impeccable manners and an innate courtesy. And that voice! There’ll never be another.