This is my favourite time of the year. The countryside round where I live in deepest rural Essex is vibrant with greens and yellows and whites, and for once the farmers have not given the verges the severe haircut they usually do, so there is plenty of cow parsley and buttercups on show. I wish everything would freeze-frame and remain like this. It’s all over too quickly. 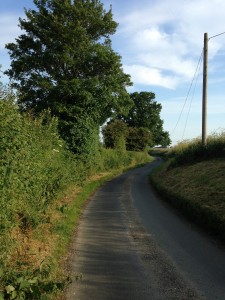 My morning dog walk (with Bumble our eleven year old brown lab bitch) takes me into the 18th Century Field, so-called by us because it can’t have changed much in the past 300 years. It looks like something out of a Watteau landscape especially at the times when there are cattle there, lying under the oak tress (not today). There’s a slope down to a wide flat pasture with the River Pant flowing alongside. 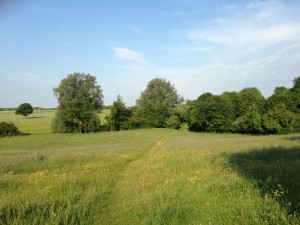 The little bridge we used to cross still has an unsightly council road sign at both ends: Danger Bridge Under Repair. It was a narrow but solid structure that was smashed to smithereens by a huge tree falling on it after a severe gale a few years ago. I doubt if it will ever be rebuilt. Sometimes you catch a flash of a kingfisher sprinting away. On sunny mornings, my walk is accompanied by a magnificent song thrush whose favourite perch is on the exposed topmost branch of a beech tree. I spotted him today, his head thrust back like an operatic tenor as he gave his all in an imaginative and varied recital. Yesterday a green woodpecker flew out in alarm from one of the riverside trees just a few feet in front of me squawking its distinctive squawk. I saw it make for a tree on the other side of the field where it clung in profile to the side of the trunk like a squirrel until I got too close again. On one of the other routes we take, I saw a baby muntjac the other day standing in a stream that leads into the Pant. It slithered away into the undergrowth. There’s something rather sinister about these strange, solitary creatures. 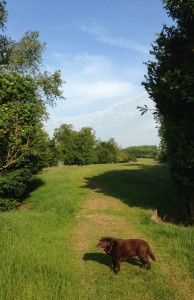 Further along the 18th Century Field is the weir – well, a sort of man-made slope in the water, something to do with the local water board – where Bumble likes to have a dip and search for underwater stones. The path along the river, so muddy and bare in winter, is now almost impassable with grasses and nettles. Boots and trousers get soaked from the dew, more so than if one had been caught in a heavy shower. It is all utterly still and quiet. 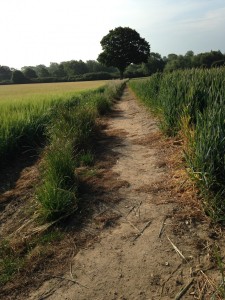 Later on Bumble will usually say hello to her two boyfriends, Cyril and Albert (two black labs), and be given a carrot by Shirley, their owner, while she turns out her horse, Diesel. Jillie used to share the stables with Shirley till she gave up riding a few years ago. Occasionally Bumble and I will bump into Nigel and Nelson. Nelson, despite having had his tackle removed, is an extremely amorous admirer of Bumble. His constant attentions tend to interrupt Parliamentary meetings (Nigel and I are the only two cabinet members) where the world is set to rights on these early morning excursions and when sound advice is offered the government. If only Cameron, or whoever, would listen, the country would be run far better. Bumble knows Nigel means biscuits and is very attentive to his right hand pocket. Walking back home, there was the distant call of the cuckoo from the other side of the village. 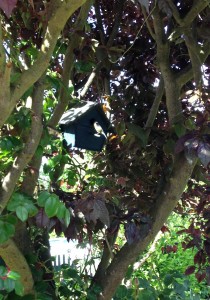 Back home the garden is looking at its best – and what is particularly gratifying this year is that we have blue tits in the bird box, surprising because we put it out quite late in the season. Mum and dad are very busy at the moment, delivering morsels to their babies in a relay, each one revisiting the box every minute. How do they fly in to the box so fast, put the brakes on, stop so accurately and then, having deposited the grub in their beak, take off like a rocket? They seem to have just two gears: top speed and neutral. There’s just one concern. I stepped out of the study door at the back to see a fat jay standing below the tree looking up at the bird box. It gave me a languid look of scorn and beat it. Jays and magpies are equally vicious. They have no conscience about where their food comes from and baby tits make a perfect meal. The way they pull live chicks to bits while devouring them is an upsetting sight. Strangely, you never hear the anti-hunting brigade campaigning against jays and magpies, but the manner of death they inflict on baby chicks is more brutal and lingering than the death of a fox killed by hounds.